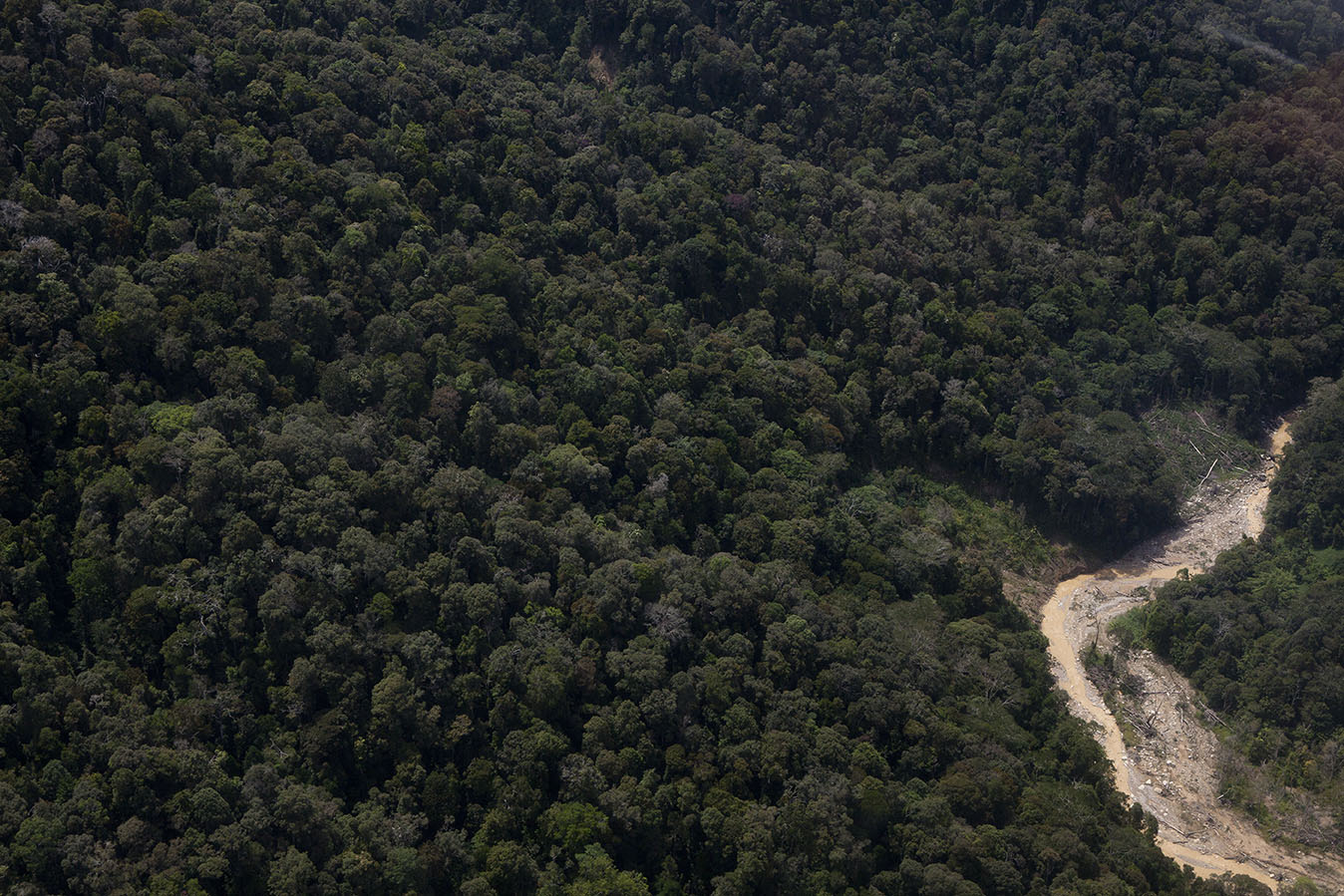 Mining has been occurring in Papua New Guinea for about a century, mainly in specific gold fields such as Misima Island, Wau-Bulolo, Woodlark Island and Mt Kare (amongst others), but also as large scale modern mines since the 1972 development of the Panguna copper-gold-silver mine on Bougainville Island, the mid-1980s development of the Ok Tedi copper-gold-silver mine in Western Province, the Porgera gold mine in the Central Highlands in the mid-1990s, the Lihir gold mine in New Ireland in the late 1990s and more recently the Hidden Valley gold-silver mine in the late 2000s. Smaller gold mines include Tolukuma, Kainantu, Simberi and Sinivit, as well as major deposits being explored and considered for development at Frieda River, Wafi-Golpu and Yandera. The Ramu nickel-cobalt project (near Madang) was built in the late 2000s, and, after an unsuccessful legal case attempting to block the use of marine tailings disposal, began production in late 2012. A basic mining map of Papua New Guinea is shown in Figure 1. At the Panguna and Ok Tedi copper-gold-silver mines, mine tailings were directly discharged into an adjacent river system, while waste rock was either directly dumped to the river or placed on easily erodible dumps. The substantive scale of social and environmental impacts from the Panguna mine led to a civil war breaking out in May 1989 which lasted more than a decade (Havini & John, 2001), before peace was finally negotiated in 2002. Riverine mine waste disposal is still being used at Ok Tedi, Porgera and Tolukuma, which are all associated with severe environmental and social impacts along their respective river systems (especially the Fly River downstream from Ok Tedi; see Bolton, 2008 and papers therein; Tingay, 2007).

Alternatively, at the former Misima gold-silver mine on Misima Island east of Port Moresby, as well as at the operating gold mines of Simberi and Lihir, tailings are discharged to the sea at depths of ~100 metres or more. The Ramu nickel-cobalt project, near Madang, also now uses marine disposal of tailings and began production in late 2012 after the failure of a lengthy court case where the community sought to stop the use of marine tailings disposal. Ongoing concerns about impacts from marine tailings disposal at Basamuk Bay are regularly reported in PNG’s formal and social media (see PNG Mine Watch, 2014). 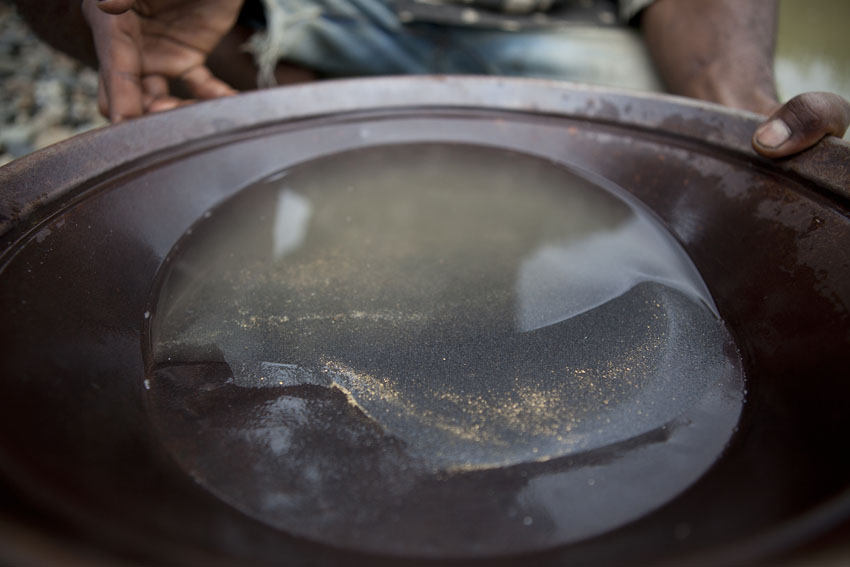 By the start of the new millennium, there was yet to be a major mine in Papua New Guinea which used conventional engineered mine waste management techniques, such as a tailings storage facility (or tailings dam) and careful waste rock dump designs to minimise erosion and environmental impacts. These approaches are required by law in countries such as Australia or Canada and are considered standard mining practice. Although the mid-2000s Kainantu gold mine built a tailings dam, though the dam was very modest in scale and not comparable in scale to Ok Tedi or other major mines. The 2013 and cumulative production from major mines across PNG are shown in Tables 1 and 2, along with reported mineral resources in Table 3. As can be observed, some projects such as Lihir and Ok Tedi remain large producers, while deposits such as Wafi-Golpu and Frieda River could be substantial new mines if they are successful in the assessment and approvals process and proceed to commercial production. 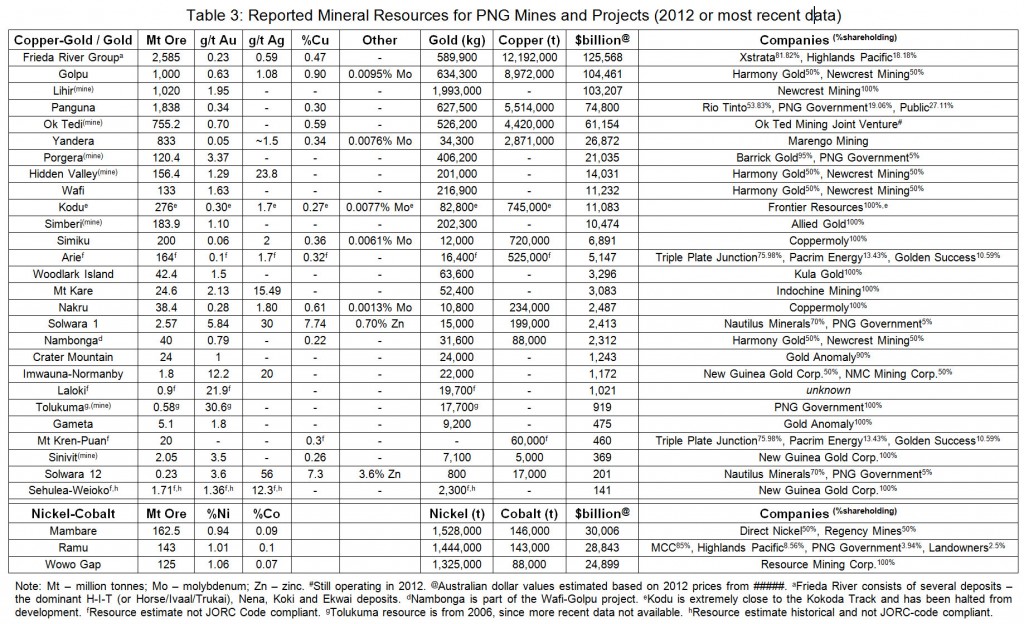 Mining in the Morobe Province

This section is summarised from Lowenstein (1982) and Enesar (2004), unless otherwise noted.

Gold was discovered in the Morobe Province in 1910 by Arthur Darling in the Bulolo River near Koranga Creek, although significant activity did not start until the site was re-located in 1922 by William Park and Jack Nettleton. The region was proclaimed a gold field in February 1923, with work focussed on alluvial gold in Koranga Creek and the Bulolo River. Interest continued to grow as rich deposits of alluvial gravels were discovered throughout the 1920s, and in 1927 the first hard rock or lode gold deposit was discovered at Edie Creek. By 1930, both alluvial dredging and hard rock mining was progressing to modest scale projects based on rich gold grades and easily mineable ore at or near the surface.

The Day Dawn hard rock mine at Edie Creek began production in May 1931, while the large scale Bulolo dredge began operations in March 1932. The major operations in the region concentrated on dredging in the Bulolo area and hard rock mining around the Edie Creek area throughout the 1930’s, with record field production in 1940 of 8,477 kilograms of gold and 6,025 kilograms of silver (about 272,500 ounces of gold and 193,700 ounces of silver). At its peak in 1941, the Bulolo dredge processed about 3 million tonnes of gravels per year and recovered some 5,200 kilograms of gold and 2,250 kilograms of silver – a yield of 0.22 grams of gold per tonne of gravel processed (silver yield was 0.098 g/t). The Koranga sluicing operation processed up to some 1 million tonnes per year of gravels at an approximate yield of about 0.09 g/t gold (silver yield was about 0.05 g/t). The outbreak of World War 2 and the advance of the Japanese military in the area closed the entire field in January 1942.

The Bulldog track from Upper Edie Creek to the Lakekamu gold field to the south was built by the army from 1942 to 1944 to help supply the war effort in the region. After a period of damage assessment and reestablishment of infrastructure, especially power supplies, dredging recommenced at Bulolo in February 1947 with hard rock mining re-starting at the Upper Ridges site in 1948. While dredging and hard rock mining returned to their previous production levels for the 1950’s, the field had begun to decline by 1960. The Bulolo dredge closed in 1967, and the Golden Peaks mine near Wau closed in 1977. Reported production over time is shown in Figure 2. The alluvial gold resources were considered to be depleted by the mid-1980’s, with attention turned to trying to revive the Edie Creek area (Neale, 1994) as well as develop the Hidden Valley/Kaveroi and Hamata deposits discovered in the mid-1980’s (see Pascoe, 1991; Denwer and Mowat, 1997).

After resuming production in 1947, the Bulolo dredge only processed about 1 to 2 million tonnes of gravels per year and recovered between 1,000 to 2,500 kilograms of gold per year and between 300 to 1,000 kilograms of silver per year – an average yield of 0.11 grams of gold per tonne of gravel processed (silver yield was 0.051 g/t). The Koranga sluicing operation continued processing at between 0.5 to 1 million tonnes per year of gravels at an approximate yield of about 0.09 g/t gold (silver yield was about 0.05 g/t), though post-war operations only lasted from 1952 to 1961. 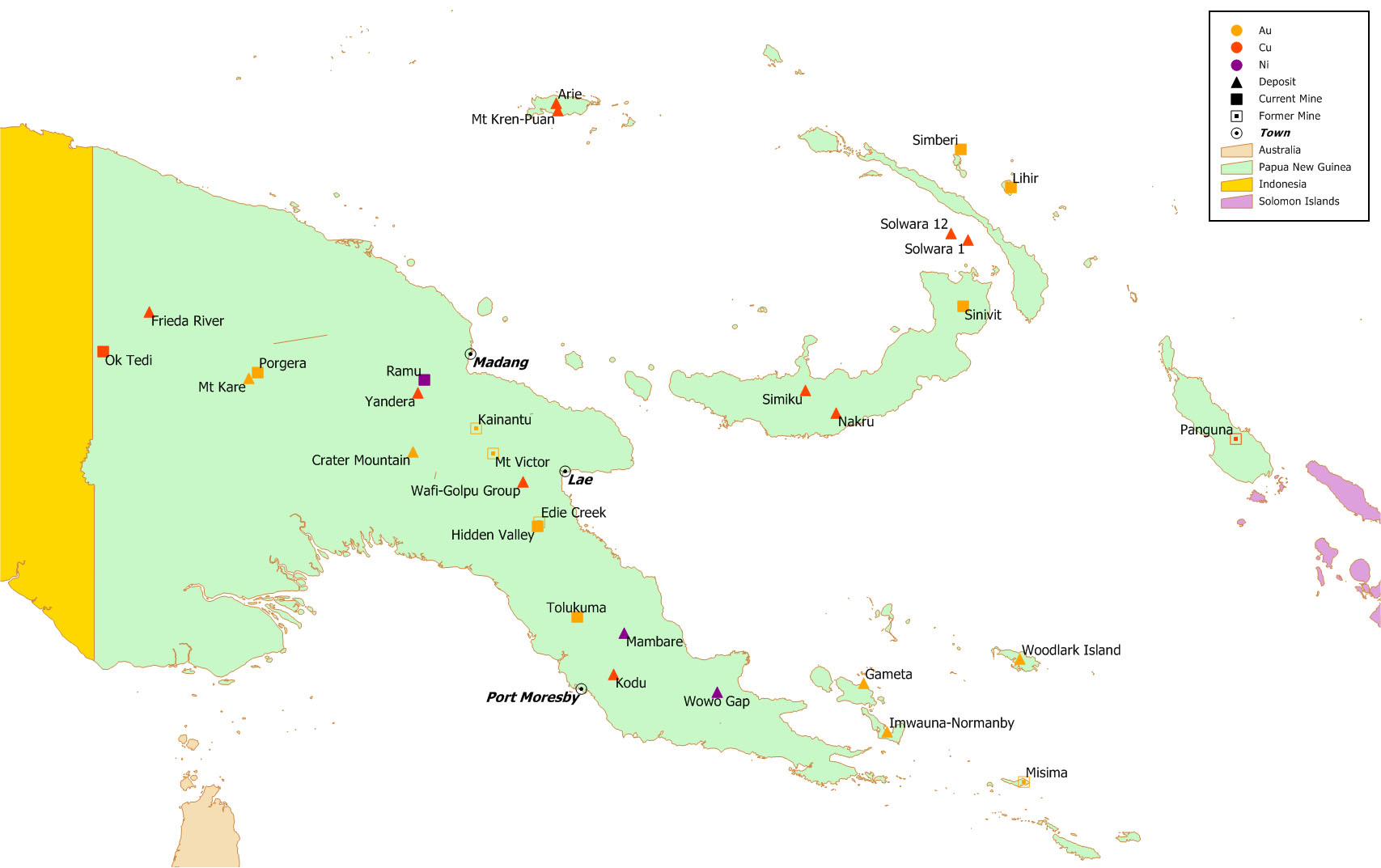 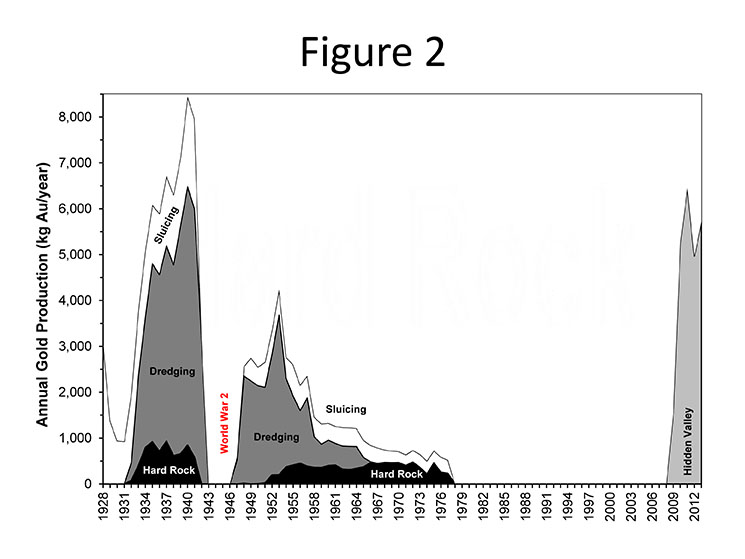 Exploration activity in Morobe – Wafi-Golpu and beyond

While the Hidden Valley mine has impacted on the environment and communities there is also a genuine concern, if not fear, about further impacts from the mining. During the field visit for this project, MPI discovered that few people along the river had heard, let alone been consulted about the potential for further mining development in the region or Province. This is despite the raw prospectivity of the Province and the potential for mining to impact not just on communities where the mining occurs but on the Province as a whole as shown in Fig 16 and Table 11.

According to MMJV’s own presentation at the PNG Chamber of Mines and Petroleum Conference of 2013, the Morobe Province is highly prospective with a concentration of activity within 30km of Wafi and further exploration licenses along the Watut and Markam River regions. As well as the extent of potential mining activity there is also the issue of scale with Newcrest listing Wafi-Golpu as one of their ‘big three’ along with Lihir in PNG and Cadia Valley in Australia, at their AGM in September 2013.

To date, while there are extensive seabed exploration licenses in nearby West and East New Britain, New Ireland, Manus, Medang and Milne Bar Provinces, only one has been registered in the Morobe Province. There are, however, a number of predominantly terrestrial licenses that extend into the sea along the coast. While the seabed mining industry has yet to develop, an extension of exploration interest into Morobe waters could place additional development pressure on the Province. 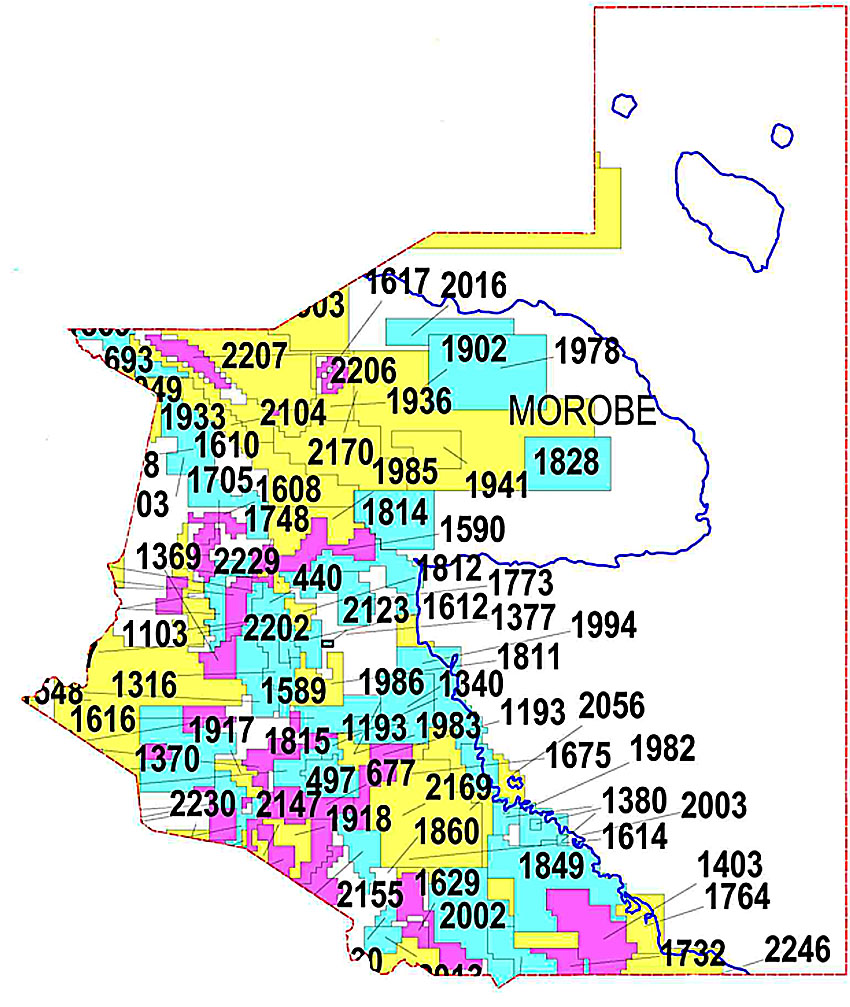 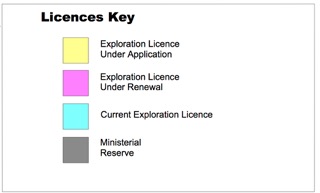 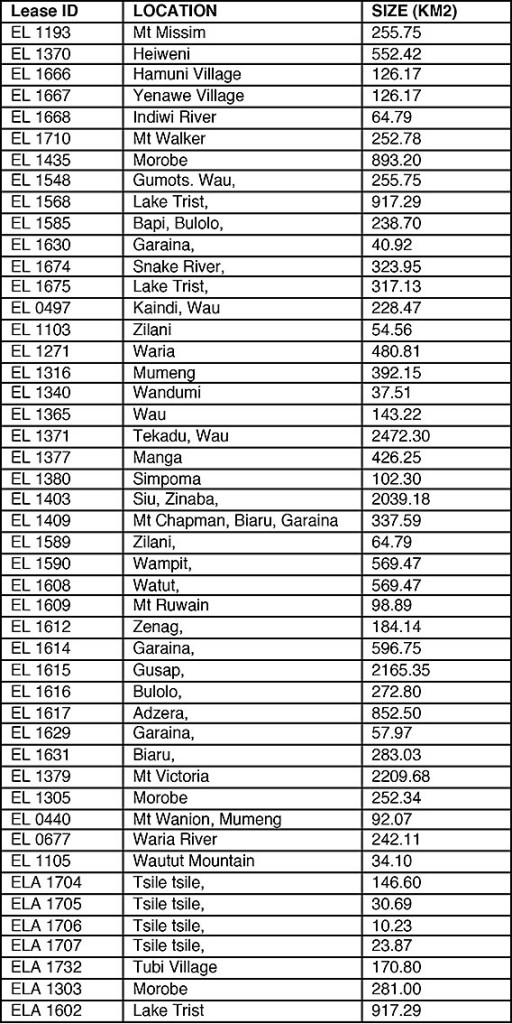