Assessing the policies of the MMJV operations is a difficult and complex process. As a wholly owned JV by Newcrest and Harmony Gold, there is little information available to the public. For example, while the management team is listed on the MMJV website, there is no mention of a Board. There is also a stark absence of guiding policies, forcing interested parties to turn to the joint venture owners for policy guidance.

Newcrest has a suite of policies (2013) that deal with a range of internal and external issues including governance, safety, environment and community, and a code of conduct. In general, the policies are high level and hard to assess against performance, as is the norm for much of the globalised mining industry. The following principles taken from their Communities, Environmental and Operations Policies have clearly not been consistently delivered when examined against the evidence in this report. Together they illustrate how well meaning policies can be ineffectual at best, and at worst, provide a ready company defense while obscuring the real impact on the ground.

Community: Be open and transparent in all dealings with communities and in describing and explaining potential social and environmental impacts that might occur.

Operations: Exhibit industry leadership in the mitigation of risk and the management of both temporary and permanent change.

Perhaps this is, in part, explained by the absence of specialised skills in community and environmental impact on the Newcrest Board. Or at least a failure to monitor the implementation of organizational policies as is required by the Board Charter. Interestingly, when challenged about the Board’s ability to assess and monitor such impacts at the 2013 AGM, the Chair and CEO were quite dismissive of the need for specialized community and environment skills at Board level insert (MPI, 2014). 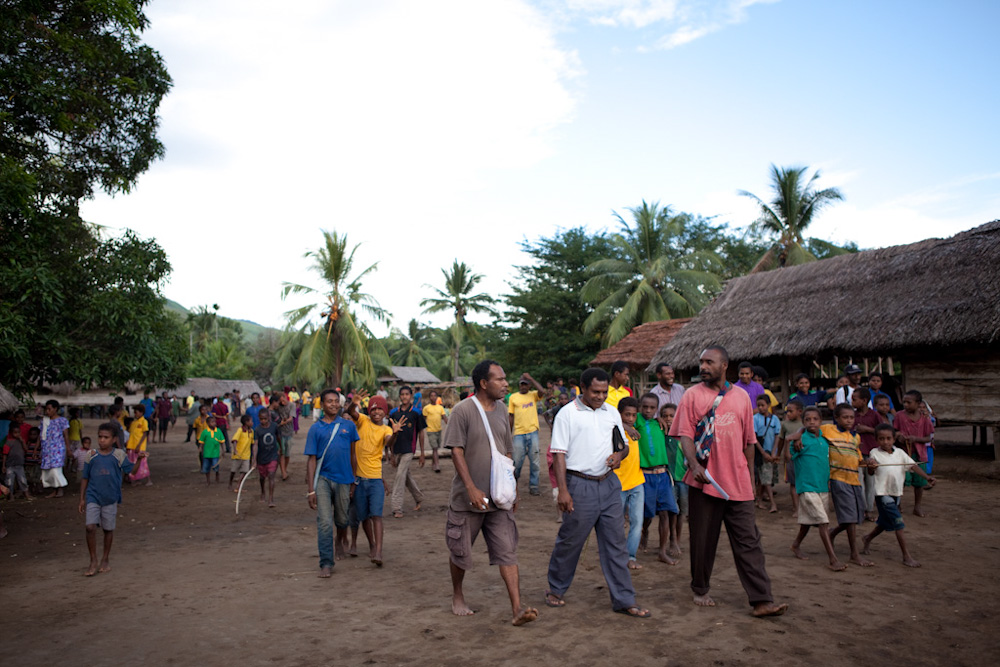 Harmony Gold does not have a set of similar policies to Newcrest, making policy comparisons difficult and time consuming. For example, rather than having a communities policy, Harmony Gold has a terms of reference for their Social and Ethics Committee. Within that document the Committee is charged with monitoring company activities in relation to: the UN Global Compact; labour; and environment and public safety. What the document does not provide is a statement of principles or criteria to guide and assess performance against.  Similarly, within the company code of ethics, Harmony stresses the importance of maintaining a social license to operate and the creation of lasting benefits for communities but again falls short of assessable criteria (Harmony, 2013).

The recently updated environment policy does provide more targeted goals, which have not been consistently delivered since the inception of the project. These include:

Environmental: …we aim to prevent pollution or otherwise minimise, mitigate and remediate harmful effects of our operations of the environment.

Environmental: We will ensure transparent engagement on environmental issues with communities affected by our operations and consider their views and concerns in our decision-making.

The confusion arising from twin, non-compatible sets of policies, diminish their practical effect in informing communities and guiding the practice of mine operators and contractors. Lack of a clear policy structure may indeed have contributed to poor practice or impact response, it also makes it difficult for stakeholders to understand company policies, standards and commitments, thereby further reducing transparency.

oth JV partners reference the ICMM principles in their respective 2012 Sustainability Reports, making them relevant standards to assess their activities.  Newcrest makes a strong commitment to ICMM via its membership of the Australian Minerals Council, and its commitment to the Enduring Values Framework since 2005, which adopts the principles, elements and implementation guidance (Newcrest, 2012, MCA, 2005).

Commendably, Newcrest includes a mention of an outstanding lawsuit in relation to the mine-related sedimentation of the Watut River in their Sustainability Report from 2011 (p.20). But unfortunately, no mention is made in 2012 despite the proceedings remaining open. Similarly, references to the SMEC Audit, which found numerous non-compliant practices, in the 2011 Report is not mentioned in the 2012 Report despite ongoing impacts and concerns. By not reporting on either of these matters in the 2012 Report, including in the GRI, Newcrest has portrayed a much more positive situation than a site inspection, data analysis and community consultation would reveal. 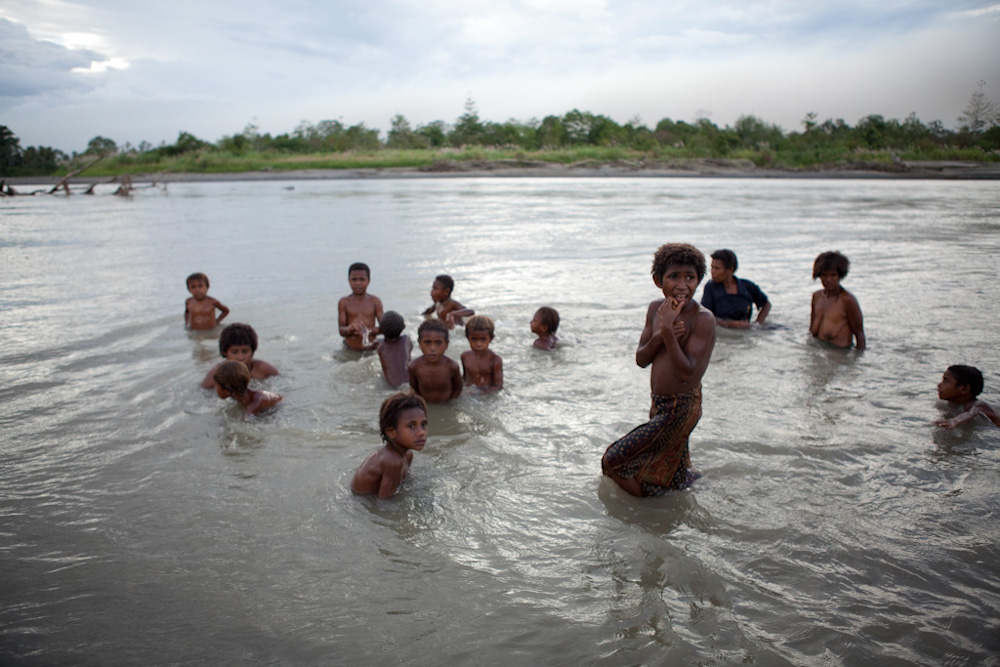 These examples of a lack of reporting, combined with the lack of available scientific reports, is at odds with general principles of transparency and openness as well as specifically, in ICMM principle 10. In Table 7 Newcrest respond specifically to principle 10, managing to convey an apparent openness without referring to transparency at all. The over reliance of companies on newsletter and factsheets as effective consultation and information sharing, while simultaneously denying stakeholders access to scientific reports and management plans reflects poorly on the company and the reporting mechanisms, as well as contributing to ongoing concern and conflict with community and stakeholders.

In another example of disclosure, Harmony Gold do refer to problems with the water quality of Watut River following mine construction and sedimentation of the river in their 2012 Sustainable Development Report (2012, P.111). Harmony refers to commissioned scientific reports, remedial action and independent advisory committee.  Unfortunately, the report does not refer to ongoing problems from sedimentation, the scientific assessments that have not been released to the public or the lack of community representation on the MMJV appointed advisory panel.  Nor does the Stakeholder Advisory Panel [ESAP] transparently ‘honour a commitment made in 2010 to continually review sediment and related issues affecting the Watut River’ (p.30).

Similarly, Harmony’s definition of and reporting on a significant environmental incident (p. 23,124), means that they have nothing to report, despite the ongoing physical and chemical impacts from the sedimentation and pollution of the Watut River.  Again, by not recognising the ongoing nature of these impacts and effect on community, including stress, the Report seems to indicate either a lack of awareness or concern or another failure in reporting standards.

An examination of Harmony’s reporting on grievance mechanisms provides another example where sustainability reporting can both fail to give an accurate description of events or result in an effective mechanism. In their GRI section of the 2012 Report Harmony state they now have grievance mechanisms in place, but ‘they have not been required to date’ (p.143).  In another section there is reference to a grievance mechanism being trialled with primary issues of concern including ‘compensation, land, environment, accidents/damage, health, safety/security business development and community projects’ (P.99). Given the acknowledged mine related problems in the area it would appear that the grievance mechanism has not been effective in identifying or hearing concerns/grievances and needs improvement before it would satisfy any reasonable standard including those in the GRI and ICMM.

To state the obvious: managing environmental impacts, implementing an effective grievance mechanism and achieving genuine, ongoing transparency, are all basic elements of a responsible mining company.  There seems to be little benefit to external users of the Sustainability Reports in reporting to ICMM principles or the GRI framework if these standards are easily satisfied by generic policy or general statements.

Both Newcrest’s and Harmony’s Sustainability Reports have been independently assured, with the companies choosing a moderate and limited assurance respectively. In Harmony’s case, it would appear that either Price Waterhouse Coopers were either satisfied with the reporting or were unable to ground-truth site reports, or detect errors and inconsistencies.  It is not clear from the assurance statement which sites were inspected nor the contract details between assurer and Company Board –offering little assurance to the report reader.

In Newcrest’s case the 2012 report used Net Balance, a different assurer than that used in the 2011 Report, though both reported to AA1000. Net Balance specifically state that ‘nothing came to our attention’ that would cause them to doubt Newcrest ICMM alignment statements. That would seem to indicate that either Net Balance approves of the level disclosure by Newcrest or was not able, or not contracted to undertake a more comprehensive assurance. There is no indication that Morobe data was reviewed under the assurance assessment.  Again the assurer is responsible only to the Board and management of Newcrest and guided by confidential terms of reference – offering little assurance to the report reader.

For both companies, a higher level of assurance with effective independent community engagement is required if the sustainability reports are to be relevant to company, shareholders and stakeholders alike. Until then, the Sustainability Reports provide little in terms of real detail and thus relevance to environment and community impacts for communities, investors or regulatory authorities.  Alternatively, comprehensive site reporting would provide constructive feedback to the company as well as a more useful assessment of impacts and actions for communities, Local, Provincial and National Governments and other stakeholders.